Fantasy Fred is an Enchanted figurine that was released in the weekend challenge of November 24 - November 26. It is the second character unlocked and the fourth total prize.

Fantasy Fred is a shirtless, adventurous and muscular version of Fred sitting on a winged snow tiger (the wings only appear in gameplay). Fantasy Fred also holds a full-size spear in his hand, and has a belt with a large buckle, armbands, and bulky brown boots.

During gameplay, Fred is still, but the snow tiger's wings flap with each hop. Fantasy Fred can also pick up 10 pixel points per day due to his Enchanted status.

The streets of San Fransokyo (the landscape of Big Hero 6) are the same for Fantasy Fred as they are for all other Big Hero 6 characters.

Fantasy Fred could be unlocked by completing the Big Hero 6 Weekend Challenge, which lasted from November 24th - November 26th, 2016.

As of now, there is no way to obtain him other than using the ticket prize machine. 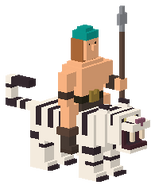 Add a photo to this gallery
Retrieved from "https://disneycrossyroad.fandom.com/wiki/Fantasy_Fred?oldid=43782"
Community content is available under CC-BY-SA unless otherwise noted.