Welcome to the Disney Crossy Road Wikia, the official wiki for the mobile game, Disney Crossy Road. This is a mobile game created and released on Android, Windows, and iOS devices. It was designed and produced by Disney, Hipster Whale, and Mighty Games. Join us now in this ever expanding community and fan base. This Wiki is administrated by Sora's Universe, Padsquad2010, and Torsita01 .

We invite you to be part of the Disney Crossy Road Community! 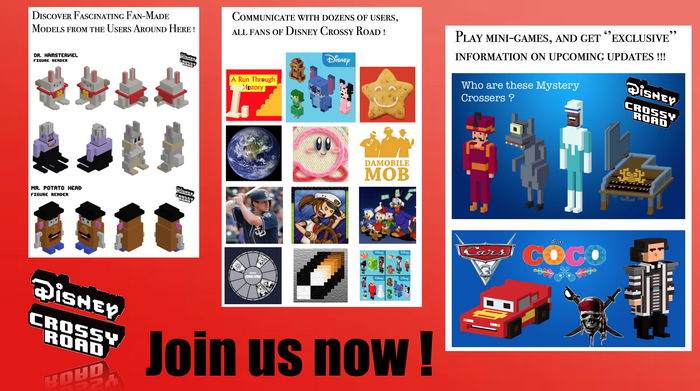 Disney Crossy Road is an all new take on Crossy Road and is currently one of the most popular apps of 2016.

PLAY - As classic Disney characters such as Mickey Mouse, Jack Skellington, Sulley, and many more!

EXPLORE - Many different locations from your favorite Disney movies such as, Monstropolis, Tundratown, The Pridelands, and more worlds to play in.

COLLECT - Many items that give you extra points, coins, and in some cases, secret characters.

COMPLETE - The Daily Missions that await you everyday. Completing six in a row unlocks a random special character such as Wedding Dress Calhoun, The Rat, Toddler Moana, and more.

CHALLENGE - Yourself to the Weekend Challenges which give you Coins, Pixels and exclusive figurines such as Boo in Costume, Spirit Mufasa, and Constance the Bride.

Updates typically released monthly and include new charters and features to enjoy.

The app is available in many different languages such as Italian, Russian, Spanish, and Swedish.

Enjoy Disney Crossy Road and the many secrets and surprises that await you!

| Last Month's poll Poll: What upcoming Cars character are you most excited for?

The results of the previous poll are in.

The winner of the poll was Fabulous Lightning McQueen, which received 51 votes out of 138.

We have created a new poll which will last for an undetermined period of time.

Vote for which Disney Crossy Road Update is currently your favorite !

Community content is available under CC-BY-SA unless otherwise noted.
Advertisement