Baymax Super Suit is an Epic figure part of the Big Hero 6 collection.

Glide around and shoot your fist off.

Baymax Super Suit is Baymax wearing his red super suit armour which allows him to shoot his fist and fly. The suit has a red helmet with purple on the sides, a large red torso with purple on the shoulders and bottom, two red hands, one of which can shoot off of Baymax, two large wings, and two legs.

Baymax Super Suit glides across the stage, and occasionally he will shoot his fist which will explode after a few seconds. A sound effect plays when Baymax shoots the fist, and another for when the fist explodes.

Baymax Super Suit can be unlocked through the coin machine for 100 coins or for 500 pixels. 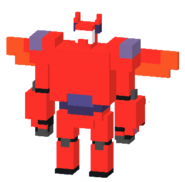 Baymax's design before his release
Add a photo to this gallery

Retrieved from "https://disneycrossyroad.fandom.com/wiki/Baymax_Super_Suit?oldid=44376"
Community content is available under CC-BY-SA unless otherwise noted.