Anger is a Rare figure part of the Inside Out collection.

Bumping into obstacles makes him so angry!

Anger is a emotion inside Riley Anderson. He is red and shaped like a cinder block. He wears a white shirt, a red and grey striped tie, brown pants, and black shoes.

While playing as Anger, you can pick up red memory orbs, which can be deposited for points. Whenever Anger bumps into an obstacle, fire will burst out of his head. 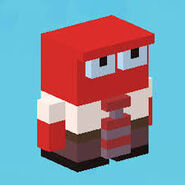 Add a photo to this gallery

Retrieved from "https://disneycrossyroad.fandom.com/wiki/Anger?oldid=45212"
Community content is available under CC-BY-SA unless otherwise noted.